People are always asking me for LGBTQIAP+ resources and book recommendations. Sometimes, it's by people in the queer community and other times it's by those looking to write inclusive characters. Regardless of your sexuality and gender identity, you still need to do your research before writing outside your lane! If you're a writer or an ally with questions, these links should get you started.

A list of advocacy and support organizations is provided at the bottom.

If you're questioning your sexuality or gender identity, know that it's okay. You are allowed to feel what you're feeling. Don't be overwhelmed and take things one step at a time. Start with terms, read a few books, and call someone if you need to. There are links to support groups and phone lines at the bottom of this page which can help. Take a deep breath. You've got this.

If you like my writing, the work I've done, and want to help out with my medical bills, consider sending a ko-fi my way. Any little bit helps!

Books
I have an ongoing Goodreads list of gender questioning, non-binary, and trans books that spans all genres and age groups.

Feel free to also check out my Goodreads Queer Reads shelf and Queer YA & Adult book list. All these lists are updated regularly.

More YA recommendations, interviews, and book reviews are available on the GayYA. Here is their masterlist divided by Gay, Lesbian, Bisexual, Transgender, Intersex, and Asexual/Aromantic identities. One of the moderators recently started a Twitter page for Trans Lit to promote works and authors along the trans spectrum.

I've found several places dedicated to reviewing and promoting books with asexual, more asexual, and demisexual characters and demisexuals in fiction. Here is some FREE ace/aro fiction. And ace master list with reviews and descriptions.

And if you're starting to write queer lit, please read 9 Queer Stereotypes I'm Sick Of Reading In YA Lit by Amelia Roskin-Frazee.

Terms, Resources, and Fact Sheets
If you’re looking for resources and safe places to find things like definitions on different genders or how to approach your loved ones with your new identity, I have information on that, too!
Human Right’s Campaign’s list of LGBTQ Resources (PDF)

http://Genderspectrum.org  Is a very accepting, easy to understand website that has good information on all spectrums of gender. Here is their article on gender questioning.

Reachout.com is also a great source for articles. They have fact sheets on gender identity, debunking LGBTQ myths, and pronouns

Safe Zone Project doesn’t offer full online training anymore, but they still have information about sensitivity, terms, and how to approach people. Check to see if your school or university has Safe Zone ALLYs! I was a certified ALLY for four years in my previous job, which meant that people knew they could come to me to talk, ask LGBTQ+ related questions, get help, and know that I wouldn’t judge. My area was a designated safe space.

It's Pronounced Metrosexual has a Comprehensive List of LGBTQ+ Vocabulary Definitions for easy browsing.


Bi/Pan/Polysex, etc
Bi.org Bisexual Resource Page
What is the difference between bisexual and terms like pansexual, polysexual, omnisexual, ambisexual, and fluid? 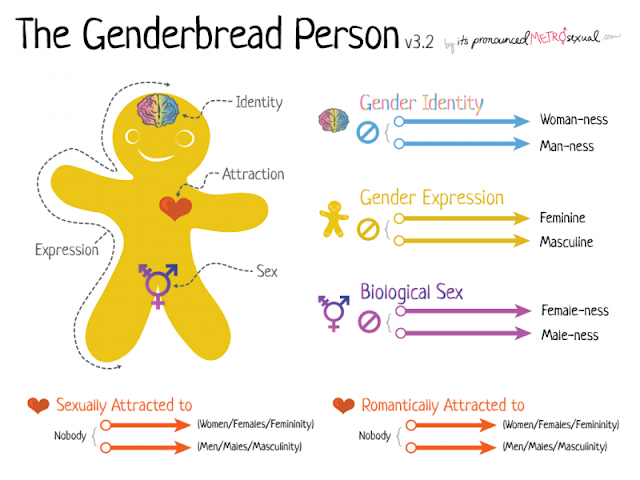 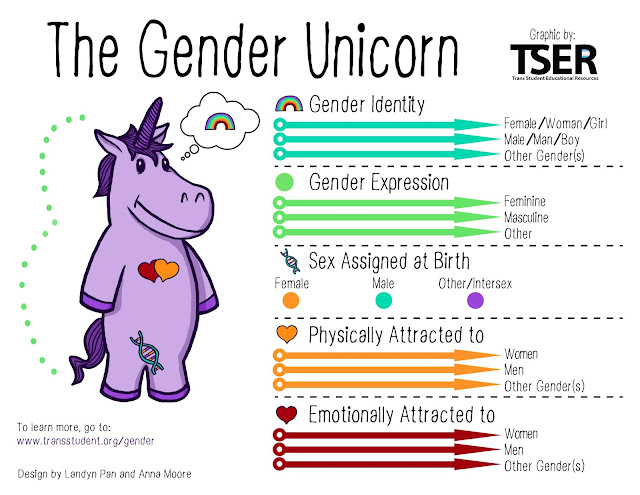 General Gay and Queer:
Everyone is Gay
My Kid Is Gay

First, let me link to the GLAAD Transgender Resources. It's a complete list of legal, medical, and general information that encompasses the entire transition process, including numbers to call if you need help.

Those AFAB (assigned female at birth) looking for more information on transitioning and resources can visit Hudson's FTM Guide. It is an invaluable source that backs its pages with facts and gives you the science behind transitioning.

YouTubers are amazing! They have literally put their transitions on the internet to help other trans people. You are not alone. Here's a list of popular Trans* YouTubers to get you started (borrowed from here):

For those AMAB (assigned male at birth), Femme Secrets has regular blog posts, tips, tricks, and provides support to those transitioning.

For a general transitioning and non-binary guide, see the Massachusetts Transgender Political Coalition MTPC Resource Wiki. Laura's Playground isn't my first go-to, but it has tons of resources for people of all ages. I am seeking more trans women resources! If any links or pages have been helpful for you during your transition, please send them my way. You can contact me @dillwerner on Twitter or leave a comment.

Here is an article from Trans Guys about trans clothing exchanges and binding/where to get free binders.

Speaking of articles, here are a few by trans* authors that include tips on writing trans stories:

On Being a Good Trans Ally by Meredith Russo, author of IF I WAS YOUR GIRL.
6 Awful Lessons I Learned Transitioning from Female to Male by Amanda Mannen & Roman Jones
5 Shocking Realities of Being Transgender the Media Ignores by Robert Evans
The Hero’s Journey in Trans YA by Vee S (GayYA has done entire series on sexuality awareness with guest authors)
Rise of the Gender Novel by Casey Plett (Here is the accompanying podcast)
We Need Trans Books… But We Really Need Trans Writers by Elliot Wake, author of BAD BOY, BLACK IRIS, CAM GIRL, and UNTEACHABLE (This has more links to the Trans Awareness Week Series from the GayYA)
Writing Sex Scenes With Less Cissexism, Pt 1: Between Characters by Xan West
Writing Sex Scenes With Less Cissexism, Pt 2: Story Level Trans-Exclusion by Xan West

Intersex
Start with the Intersex Society of North America (ISNA)'s webpage and the Intersex Campaign for Equality.
A PDF on how to be a good intersex ally.

I recommend the following documentaries:
Hermaphrodites Speak from YouTube
Intersexion: Gender Ambiguity Unveiled, available on Amazon Prime.
Is it a Boy or a Girl? YouTube Playlist
Pidgeon's Intersex Volg
What's It Like To Be Intersex? A YouTube Short by Buzzfeed


Pronouns
Here is a complete list of gender-neutral pronouns with examples and a second list on Wikipedia with the page to give you more information.
Gender Neutral/Queer Titles How do you address someone who is gender neutral?
Nonbinary.org has all your non-binary needs, language, history, and otherwise! (It seems someone else has purchased this URL for the time being)
Regender! A tool that will rewrite a webpage to make all pronouns gender neutral and more.
The Singular They by Sarah Sweet
Wikipedia's Page on Gender Neutral Pronouns Starting with Singular "They."

Non-Binary Genders
In fiction:
A Goodreads list of Non-Binary and Genderqueer Characters in YA Fiction and another Listopia from Goodreads of Genderqueer tags. Don't forget to check out my list of Gender Questioning Books.

Time for some articles!
10 Myths About Non-Binary People It’s Time to Unlearn by Adrian Ballou
7 Things You Should Never Ask a Trans (or Gender Non-Conforming) Person Short on YouTube by TeenVogue
8 Things Non-Binary People Need to Know by Sam Dylan Finch
A genderqueer activist explains what it means to be nonbinary on the gender spectrum by German Lopez
Charities and groups that benefit gender variant people
Gender Wiki
Genderqueer and Non-Binary Identities The aim of Genderqueer and Non-Binary Identities is to provide awareness, information, and resources for genderqueer, non-binary, questioning, and gender non-conforming people and their allies. -Marilyn Roxie
Genderqueer-friendly Organizations, Support Groups, and Events
I'm a Gender Non-Conforming Parent YouTube Short by Buzzfeed
Non-Binary and Genderqueer Support Forums
None of the Above by Matt Huston
Too Queer for Your Binary: Everything You Need to Know and More About Non-Binary Identities by Kaylee Jakubowski

What the Heck Is Genderqueer? by Evan Urquhart


This is a growing list of resources. More updates to come.

Black Iris by Leah Raeder My rating: 5 of 5 stars Dear Reader, if you’re searching for a story about a down-and-out little queer girl coming-of-age and blossoming as she discovers her sexuality in college, then look somewhere else. This is not the candy-coated New Adult love story for you. BLACK IRIS isn’t a love story. It’s a revenge story. And it’s about the girl who took charge and got exactly what she wanted. But maybe what she wanted just wasn’t enough. BLACK IRIS takes place over alternating timelines, which are meticulously crafted to the point of perfection. They switch between Laney Keating’s senior year of high school to her freshman year of college. At college, she meets Blythe McKinney and Armin Farhoudi, two upperclassmen who know the ins and outs of the club scene at Umbra. We see how the trio first meets and how the relationship boundaries are drawn. You’re left questioning throughout the novel if the relationships are real or empty. Do these people care about each ot
Post a Comment
Read more

I'm thankful to be featured in a Cultress article about nonbinary creators! Cellie knows my love of all things pickles. Pickles and circuses, that's my signature! 22 nonbinary creators you need to keep an eye out for I'm most known for the unreleased "circus book," pitched as Cirque du Soleil with magic and an all-queer, international cast. I also make it a point to include at least three pronouns and genders in each book and actively include disabled characters like myself. The list also includes Mia Sieger, author of Jerkbait, who is my agency sibling and bigender. We've become CP (critique partners) and fast friends since I signed. My agent is her agent's agent. See how that works? Thank you to Cultress , article author Ceillie Simkiss , and everyone involved with Nonbinary November #nbnovember for spreading some nonbinary love!
1 comment
Read more

Now that I'm out as a genderqueer person, I'm revisiting my review of BAD BOY by Elliot Wake to give content and trigger warnings for other folks. This is a trans book that contains detailed descriptions of what it means to transition from female to male written by someone who has undergone the process. If you aren't comfortable reading about these details, walk away. If you feel this might be too voyeuristic for you, walk away. If it will bring up to many thoughts or feelings of dysphoria, walk away. If hearing about TERFs and non-trans acceptance by family and friends is harmful to you, walk away. This book was influential in my life, but that's because I was in the right mindset to read it. I'm usually the one doing the vetting for others. I can handle a lot. I can handle dark and angry. If you can't, there's no problem in that. Take care of yourself and put this one aside. If you have issues with any of the following, please reconsider reading this boo
Post a Comment
Read more