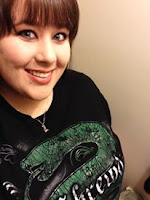 Why, hello there. My name is Dill and I’m throwing a new manuscript into the ring for Pitch Wars 2016. I’m as eternal and ageless as the child-like Empress from The Neverending Story. So I’m really 30. Don’t tell anyone I admitted it. I stopped aging at 26...Are you buying that? No. Okay, moving on. I'm clearly a Slytherin, someone who values power and influence for all the right reasons. I write LGBT+ YA and Adult speculative fiction. In my previous position, I was a certified SafeZone ALLY. I  identify along the spectrum. Representing #ownvoices! I love helping people, watching them grow, and seeing their journeys regardless of sexual orientation or gender identity. I'm a cheerleader.


My B.A.s are in Creative Writing and German Language and Literature. Originally, I started off with over 8 years of Spanish experience before switching to German my freshman year of college. Languages have always been my thing, and I've picked up a few here more and there. This manuscript was inspired by my love of all things international and cultural. It draws from my time studying abroad throughout Germany's Sachsen-Anhalt region. I taught English as a second language in Germany before going on to teach German as a second language in the US. I've also worked as a researcher/assistant in an academic library. We'd find the weirdest things in returned books; a cooked piece of bacon, beatnik poems, a piece of cloth with the word "POO" stenciled on it. There was a Wall of Shame.

ZIRKUS an LGBT+ Adult Fantasy novel that takes place in the German Harz Mountains. It follows a mystical aerial circus where performers are granted supernatural abilities by the Mountains’ Hagedisen, Goddess Witches. Each ability is based on a performer's natural talent. Nez is the ringleader and is a conjurer and fire wielder, who can juggle balls of flame. Identical twins Jasper and Kass use their aerial strengths to bend the air around them, allowing for higher jumps and impossible stunts. Emma moves across land and realms using music but prefers to use her violin as a medium.

Twenty-two-year-old Sadie Bauer never imagined her opera career would take her deep into the Harz Mountains and land her among the tents of a mystical circus. Sadie has heard the call, a supernatural draw that forces her to put all inhibitions aside and accept her best friend’s offer to become the star vocalist for Emma’s uncle’s Zirkus. When mystical abilities come into play, Sadie’s voice isn’t the only thing she’ll have trouble controlling.


Sadie is granted the rarest ability of all, enchanting. Using only her voice, she transforms the stage into elaborate scenes. Concrete is replaced by ancient cobblestones. Guy wires morph into vines that snake up the rigging. Acrobats sprout wings as they transform into hummingbirds and fly around the Big Top.

I would describe it as The Night Circus meets Miss Peregrine's. I was inspired to write Zirkus after seeing a live performance of Cirque du Soleil’s Kurios. The singers and musicians were actively involved in the show and would often take center stage. As I was watching the lead vocalist interact with the master of ceremonies, I asked myself, “What if she were creating this world with her voice?” On the drive home, I was editing another manuscript while coming up with the plotline for Zirkus.


I am a well-organized researcher. It's my thing. I’ve watched every Cirque show, over 20 hours of documentaries, and have actually studied abroad in the locations where Zirkus is set. My notes are extensive. If you have a question, ask me. If I don’t know the answer, I’m going to find out. Not only have I studied the circus life, but there are LGBT+ issues that have also been researched, which include a character’s struggles with his gender identity. I want someone to be able to pick up this manuscript and say, “She did her homework.”

I wrote a glossary. Literally, I wrote a glossary that follows all of the circus and foreign terms used in the manuscript. It probably won’t be incorporated into the final draft, but it helps me remember what’s what. Maybe you don’t know what “the evil eye” is? Here’s an entry. What on earth are those red jacket things she mentioned before? Chokha- traditional male dress worn by the Caucasus peoples from the mountain region in Georgia. Jasper and Kass wear red knee-length versions in their routine. Want to know what Kass and Jasper’s Mandarin names mean, and see them written in the traditional Chinese characters? Boom. I got you. I am so organized, it will blow your mind.

I’m willing to make changes. You can’t get better if you don’t edit, edit, edit. There will be some things we need to get rid of right away. I get it. 50 pages? Sure. If you want to combine characters or don't like a character, I'll do everything I can to make changes. Let's talk it out and get the scissors snipping. I have the research to fill the plot holes. If you have words or phrases I need to nix right away, then tell me. I will comb this monster from top to bottom, add some mousse, and leave it with a nice coif.

Deadlines are my jam. Seriously, give me a deadline, and I'll have it to you the day before. I love schedules and timelines. I'm German. Punctuality is something we pride ourselves on. It's like garden figurines and going on walks. We have a knack for these things.

Communication is key. I’m open and ready discuss things. This manuscript isn't being held hostage under lock and key. It’s a really fun idea that is totally different from anything I’ve ever done (I usually tackle serious issues). So I want to know if I’m doing the story justice, or if I need to fix it. Go ahead. Rip it apart. Give me some insight. I'll hold the chair. You crack the whip. We'll tame this lion together. Ta-da! Circus pun!

This is an LGBT+ novel but being LGBT+ doesn't drive the plot. Zirkus is about people from all nationalities, races, religions, cultures, ethnicities, and sexualities coming together to form one big troupe. They're a giant mystical diverse family. This is an LGBT+ novel centered around LGBT+ characters. The main characters are young 20-somethings figuring out who they are and what they want in their new relationships. However, this is secondary to them having mystical powers and trying not to die. Priorities, am I right?

I'm going to work until the very end. This isn't a game. It isn't a hobby. I want this. Zirkus is my seventh full-length manuscript and the third I'll be querying. I've come so close to getting the golden ticket only to have it snatched away on the wind. Even if this one doesn't work, I'll keep going.

I can supply adorable bunny pictures on demand. I have the cutest 3-toed black and white rabbit. He's three pounds of grumpy attitude with a side of sass. Panda's first two years were difficult, but my partner and I have tried made up for it in carrots and banana treats. Extra scritchins help, too. Careful, he bites! 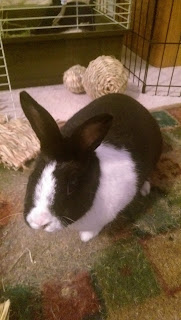 October 21, 2016
Black Iris by Leah Raeder My rating: 5 of 5 stars Dear Reader, if you’re searching for a story about a down-and-out little queer girl coming-of-age and blossoming as she discovers her sexuality in college, then look somewhere else. This is not the candy-coated New Adult love story for you. BLACK IRIS isn’t a love story. It’s a revenge story. And it’s about the girl who took charge and got exactly what she wanted. But maybe what she wanted just wasn’t enough. BLACK IRIS takes place over alternating timelines, which are meticulously crafted to the point of perfection. They switch between Laney Keating’s senior year of high school to her freshman year of college. At college, she meets Blythe McKinney and Armin Farhoudi, two upperclassmen who know the ins and outs of the club scene at Umbra. We see how the trio first meets and how the relationship boundaries are drawn. You’re left questioning throughout the novel if the relationships are real or empty. Do these people care about each ot
Post a Comment
Read more

March 26, 2017
Now that I'm out as a genderqueer person, I'm revisiting my review of BAD BOY by Elliot Wake to give content and trigger warnings for other folks. This is a trans book that contains detailed descriptions of what it means to transition from female to male written by someone who has undergone the process. If you aren't comfortable reading about these details, walk away. If you feel this might be too voyeuristic for you, walk away. If it will bring up to many thoughts or feelings of dysphoria, walk away. If hearing about TERFs and non-trans acceptance by family and friends is harmful to you, walk away. This book was influential in my life, but that's because I was in the right mindset to read it. I'm usually the one doing the vetting for others. I can handle a lot. I can handle dark and angry. If you can't, there's no problem in that. Take care of yourself and put this one aside. If you have issues with any of the following, please reconsider reading this boo
Post a Comment
Read more

November 21, 2017
I'm thankful to be featured in a Cultress article about nonbinary creators! Cellie knows my love of all things pickles. Pickles and circuses, that's my signature! 22 nonbinary creators you need to keep an eye out for I'm most known for the unreleased "circus book," pitched as Cirque du Soleil with magic and an all-queer, international cast. I also make it a point to include at least three pronouns and genders in each book and actively include disabled characters like myself. The list also includes Mia Sieger, author of Jerkbait, who is my agency sibling and bigender. We've become CP (critique partners) and fast friends since I signed. My agent is her agent's agent. See how that works? Thank you to Cultress , article author Ceillie Simkiss , and everyone involved with Nonbinary November #nbnovember for spreading some nonbinary love!
1 comment
Read more